Light! Even in a Dark Age! 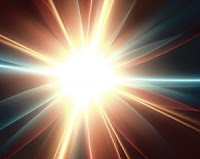 "Light and darkness, life and death, and right and left are siblings
of one another, and inseparable. For this reason the good are not good,
the bad are not bad, life is not life, death is not death.

Each will dissolve into its original nature,
but what is superior to the world cannot be dissolved for it is eternal,"

The Gospel of Philip, from the Gnostic Gospels of Jesus, by Marvin Meyer.


Contained within many of the world's various philosophies, religious writings and texts, as well as spiritual documents, resides the concept of "light and darkness," and throughout recorded history, we can see where these themes are interwoven in the tapestry of mankind on Planet Earth.


It seems there have always been two major forces at work, light and darkness. Each is seen with its own attributes and characteristics. Most often light is seen as positive and good, and darkness is viewd as negative and bad, but as our introductory quote says, "Light and darkness are siblings of one another, and inseparable. For this reason the good are not good, the bad are not bad...Each will dissolve into its original nature." Interestingly, this is the first time I have run accross this concept, but as I think about it, it certainly makes a bit of sense.


Now what is it that makes a bit of sense to me? Well, that everything is connected and interconnected, and all things comes forth from the Source, Universe, Cosmic Consciousness, or whatever one may chose to call it; a place from which everything originated and emerged. So, if everything emerges from this so-called Source, sooner or later, it will return.


Thus, as the quote says, "Each will dissolve into its original nature," and in my mind, that means everything dissolves back into that from which it came from; I should think. However, there are other opinions regarding this which may differ somewhat, with most being pretty similar, whether its the Kabbalah, or other ancient teachings, and that is we all originate from a creative source and from that source we may return.


However, living in this moment of time and physical space, we are confronted with many challenges, or forces of negativity, which seem to be pummeling us on an almost moment to moment basis. According to the many ancient wisdom teachers these positive and negative events are cyclic events which occur periodically throughout time.


Sharron Rose writes, "According to the ancient texts, this cycle of the ages begins with a Golden Age [Krita-Yuga] of beauty, harmony and grace, an age in which we are all, both male and female alike, fundamentally connected with our own divinity, living lives of total truth, fully aligned with the universal spirit. As the ages progress metaphorically from gold to silver [Treta-Yuga], to bronze [Dvapara-Yuga], and finally to iron [Kali-Yuga], the mass of humanity draws further and further away from the numinous and radiant light of spirit. We move towards an age of total materialization and concretization, a time of ignorance and delusion, a time in which the bright light of spirit is all but extinguished. The ancients called this age the Kali Yuga, the Age of Iron."


Ms. Rose goes on to say, "As this dark age [Kali Yuga] progressed into it's fullness, industrialization appeared with its factories, toxins and pollutants. In Europe, at the beginning of the industrial revolution, or machine age, the total rape and pillage of the planet was in full swing. This was the complete manifestation of the Age of Iron. It was at this time that we collectively entered our current age of materialist science and intellect, of rationalism and externalization. A dark age, which has been characterized by the destruction and devastation of the feminine, and the very earth that gave us life." http://tinyurl.com/26qvruo


One doesn't need to be an Einstein to "see" that we are in the throws of a dark age where toxins, pollutants, inhumane acts towards others, and eco-disasters are the order of the day. The planet is indeed being maliciously raped daily and plundered by the greedy robber barons, politicians, and banksters, who are taking us one step closer to the collapse of our environment and species.


One of my major concerns with all of this, however, is how such a vast majority of the people, in this country, are just laying-back and allowing all of these horrific things to occur. They're breathing in toxic air, drinking water and beverages filled with chemicals and drugs, eating food that's loaded with hormones, pesticides and whatever, and then giving it to their kids. Sad!


Is it any wonder that a growing number of children and adults are being plagued by all sorts of physical and mental problems. If anyone did random blood analysis on people it'd blow their minds, but as I mentioned, the worst thing, to me, about all of this, is that people are allowing all of these things to happen, and even in some cases contributing to, and participating in it.


As some learned people have already stated, we have reached a "tipping" point, a tipping point that we cannot go back from. Sadly, there's no way that the Gulf of Mexico can be returned to its original and naturally pristine state, in any near probable future. NO WAY, it's too late, especially with the Corexit dispersants, Lye and other chemicals that have been mixed-in. No matter what any politician or expert says the Gulf is a toxic sewer! It's simply too late, and the eco-disaters continue! The other day a barge ran into a closed oil rig in the Gulf, and guess what? More oil spewing from the now damaged "capped" oil well!


Our newest oil spill in the US is now right here in Michigan, which shows no area is immune to an eco-disaster! On Tuesday, July 27, 2010, an estimated 850,000 +/- gallons of oil spilled into the Kalamazoo River, and this river "bisects the city of Kalamazoo and meanders to Saugatuck, where it empties into Lake Michigan." Isn't it great! "Drill Baby Drill!" "Lay more pipelines!" RIGHT! http://tinyurl.com/27ppaev

So, here we are, living in the Kali-Yuga, the Age of Iron. Witnesses to the ravaging of our planet, virtually helpless to do anything, but, there is always something we can do, even under the most dire of circumstances, and what may that be, one might ask?

Wake people up! Osho says, "99.9% of the population of the planet are either asleep, or drunken." This leaves .1%of the population who most likely have some awareness as to what's going on! If so, then we need to reach out, find those people, and let them know, they have the power within them to initiate change; even in a dark age!

Change occurs when people come together under the premise of working together for the benefit of everyone, without thought of race, religion, education, sexual preference, or anything else, and simply realizing that we're all just people trying to make a decent life for ourselves.

Another important aspect to initiate change is by encouraging people to think, realizing the importance of health and well-being, and help people get out of the box they've been in for most of their lives. The formula is relatively simple, it's just getting people together in mutual harmony, away from their own agendas, and committed to the welfare of all. It can happen, but if it will, remains to be determined!

"For there is hope of a tree, if it be cut down, that it will bloom again, and that the tender branch thereof shall not cease."

There is always Light, even in the darkest dark age!